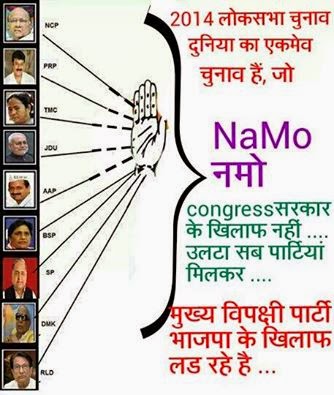 Rahul's Claim of M Phil is Perjury, Says Swamy
(Page # 6, New Indian Express, Hyderabad - 25/Apr/2014)
Accusing Congress vice-president Rahul Gandhi of submitting a false affidavit on his educational qualification while filing his nomination as a candidate from the Amethi Lok Sabha constituency in Uttar Pradesh, senior BJP leader Subramanian Swamy has said that Rahul’s affidavit contains a wilful falsehood which is tantamount to perjury.
DECIDE BETWEEN MODI AND RAHUL IN 3 MINUTES VIDEO-


Speaking to reporters here on Thursday, Swamy said that he had filed a complaint with the Election Commission against Rahul Gandhi on April 14 alleging that the Congress vice-president had committed ‘perjury’ regarding his educational qualifications and urged the commission to seek an explanation from Rahul and ask him to submit a copy of his certificate.
Swamy said the Gandhi scion had registered himself as ‘Raul Vinci’ at the University of Cambridge. But Rahul is not an M.Phil from the British university, he said.
“I had visited the University of Cambridge in 2006 and found that in the department of development studies and in the library there was no record whatsoever of Rahul Gandhi having studied for the M.Phil course, much less passed the examination and much less wrote the mandatory thesis. In fact, according to a letter dated April 22, 2008, Raul Vinci had failed in the examination in the National Economic Planning and Policy course.”
“Rahul must produce his certificate. Else, his nomination should be cancelled on charges of perjury,” the BJP leader said.
Defending his party raising the land deal by Priyanka Gandhi’s husband Robert Vadra, Swamy said “How can looting nation’s resources could be a personal issue? Let Priyanka give us the definition of personal issue,” he quipped.
Accusing Priyanka Gandhi, her husband Robert Vadra and her mother-in-law Maureen Vadra of illegally possessing different Director Identification Numbers (DINs), Swamy said that he had asked the ministry of corporate affairs initiate criminal prosecution of Priyanka Gandhi for allegedly possessing three different DINs.

Posted by Pradeep Singh at 10:46 AM No comments:

British thought of India and how they managed to rule India.

Just read what INDIA was as per LORD MACAULAY on his statement on 2nd February 1835, in the last snap. That would really shock us. Old Photographs from Indian History. Please Read the last Article Carefully
See what the India was at 1835…….
The daughter of an Indian maharajah seated on a panther she shot, sometime during 1920s.

A British man gets a pedicure from an Indian servant.

The Grand Trunk Road , built by Sher Shah Suri, was the main trade route from Calcutta to Kabul .

A rare view of the President’s palace and the Parliament building in New Delhi .

A group from Vaishnava, a sect founded by a Hindu mystic. His followers are called Gosvami-maharajahs

LORD MACAULAY on his statement on 2nd February 1835, in the last snap
Posted by Pradeep Singh at 10:44 AM No comments:

AAP/KEJRIWAL IS A TRAITOR AND LIAR.

Aam Aadmi Party says they are completely transparent about the sources of their party funding but the facts beg to differ.
1) During Anna’s movement, approx Rs. 200 Crores were received as donation, but Kejriwal said they got only 2 Crores. Anna himself said on camera that over 3 Crore people gave donation and there was blatant misuse of movement funds by Kejriwal. In fact, back then, this was one of the main reasons of behind split between Anna and Kejriwal. Anna’s ex-blogger Raju Parulakar revealed this on TV as well. No one has a clue where those 200 Crore went into, except Mr. Kejriwal. If we assume that both Kejriwal and Anna are saying the truth then that would mean over 3 core people gave 2 Crore rupees in donation : an average of barely 60 paisa per donor. Laughable !
https://www.youtube.com/watch?v=kUnVeNwZp-E (More than 3 Crore people gave donation and Kejriwal misused it- Anna Hazare)
https://www.youtube.com/watch?v=EosoY4boXwE (During Anna Movement Donation worth 200 Crore came in, Kejriwal offered only 2 Crore to Anna)
2) Everyone in the country saw on TV how a rep from a private company tells Sazia Ilmi that they'll give 20Lakh cash, but they don't want their names to come out in public. Shazia says that it can easily be arranged. Which means they will take money in cash and wont post donor name on website! Now that’s not the transparency they advertised, did they?
https://www.youtube.com/watch?v=GeWiunyLcxM
3) Founder of AAP revealed that AAP has approximately 600-700 paid workers in Delhi. They get minimum 25,000/month of salary. Which implies that every month approx Rs 1.5 -2 Crore in cash comes from Congress party’s MP Navin Jindal. AAP never posts this detail on their website!
https://www.youtube.com/watch?v=kjJ7-4-QM6g
4) AAP gets a lots of funding from Saudi Arabia in the form of Cash, says the founder of AAP. AAP has never posted this detail on their website. You can check many Saudi and Pakistani websites asking people to defeat modi and vote kejriwal and congress!
https://www.youtube.com/watch?v=tNdcuoAl2Aw (AAP getting cash donation from Arab countries)
http://covertwires.com/2013/11/17/islamists-in-pakistan-launch-online-donation-campaign-for-aam-aadmi-party/
http://www.niticentral.com/2013/10/16/who-funds-the-aam-aadmi-party-146532.html
5) AAP gets lots of Cash fund from CIA’s front agency ford foundation. AAP never shows detail of this funding. Now you may say “is every NGO receiving ford funds anti-national?” No, maybe not. But the specialty about Kejriwal’s NGO was, it started receiving donations 2 years before it was even formally founded. Ever heard of that before?
https://www.youtube.com/watch?v=L6YrQ4n4i5k (AAP getting Cash donation's from Ford Foundation)
https://www.youtube.com/watch?v=7u2gINKaDBE (Kejriwal's NGO Kabir got donation from Ford foundation 2 yrs before its foundation)
6)The courts have already ordered probe into foreign funding of all political parties, including AAP. However, AAP is also charged with violation of FCRA and is yet to answer the courts on that.
(http://indiatoday.intoday.in/story/delhi-hc-asks-centre-look-into-aam-aadmi-party-accounts-delhi-polls/1/319767.html)
Despite all these revelations and evident discrepancies, the congress paid media advertises that AAP is transparent about their source of funding!
What about BJP funding, people ask. well BJP being an old national party with millions of volunteers, has a wide array of donation sources. Rest assured, none of them are from evangelist american or saudi or any anti-indian sources but rather from the very people of India.
Thank you very much.

Anjali Damania accepted on Times Now that she is a pathologist by profession. However she purchased farmers' land in Maharashtra by declaring herself as a 'farmer' and thereafter sold that land to Private real state conglomerates [1]. This fraud wasn't the first time; she is a known Land Shark in Maharashtra [2].
(As a side fact her husband Anish Damania, head of Emkay Global, was charged with erroneous trading order, which led the Nifty to slump by 900 points (more than 15 per cent) [6])
In the past she, along with Kejriwal, levelled charges against Nitin Gadkari for Irrigation scam. None of the wild allegations put by the shoot and scoot team could be proved [3], but in doing so they protected the actual accused of Irrigation scam - Sharad Pawar [4]. Damania wasn't even aware of the whistle-blower of the entire scam (chief engineer Vijay Pandhare). After which the state BJP unit was the first to unearth the irrigation scam and had undertaken public agitations but Kejriwal took all credit with media glare and spicy false allegations.
What media never highlighted was the fact that Gadkari promptly challenged Damania's wild rants with a legal notice [5]
Now here comes the interesting part. When people asked Kejriwal how come AAP has got Anjali Damania, a known Land Shark, in the party? Then Kejriwal LIED and said she’s just an 'ordinary volunteer'. [7]
But now we find that AAP has given her a LokSabha ticket from Nagpur, Maharastra.
‘Just a volunteer' Mr. kejriwal ?
via ShankhNaad

Posted by Pradeep Singh at 10:43 AM No comments:

DARBAAR-ROTTEN DYNASTY OF NEHRU-GANDHI ARE TERMITES FOR INDIA.

Dynasty, a political tool in the hands of the NEHRU pariwar changed India to a Family Of Durbar, (autobiographical account of journalist Tavleen Singh.
But what is it about dynastic politics that so animates Tavleen Singh? That she was self-admittedly part of the durbar of the dynasty for a while, before her conscience as a journalist conflicted with demands of dynastic loyalty, is only part of the story. The other part, which is the theme running right across the book, is how dynasty eats into the vitals of every organ of the state, slowly but surely and with studied effectiveness.
Durbar is a chronicle of the times of Rajiv Gandhi and Sonia Gandhi. An intriguing thought that springs after reading the book is this: Are most of the problems that India faces today a construct of the Rajiv Gandhi era? Consider the evidence:
It all began with Rajiv Gandhi’s ten year era in politics – five as a MP and advisor to Indira Gandhi and five as Prime Minister himself. We as a nation are still paying the price.
India, unlike Western democracies, has a very poor record in well-written memoirs by those still active in public life. Tavleen Singh’s book therefore is a brave exception. Read it for it gives us a fantastic view of our recent history and some interesting tidbits – how a close friend of Sonia Gandhi was under investigation for Indira Gandhi’s assassination, how all Congress people mysteriously survived and only Rajiv Gandhi was killed by the LTTE bomber, the rise of the bimbo brigade in the Congress and how Naveen Patnaik had a very lively past before he became the sombre politician of today.
Posted by Pradeep Singh at 8:37 AM No comments:

Email ThisBlogThis!Share to TwitterShare to FacebookShare to Pinterest
Labels: CONGRESS

THIS IS MOVED TO WWW.DECODINGHINDUISM.COM