Sahana Singh @singhsahana
Indology | 18-01-2017
Given that ancient Indians set so much store by learning, it should not come as a surprise that they had a meaningful rite of passage to mark the graduation of students, called Samavartana or Snana. In the presence of students, teachers and invited guests, the graduating student would offer his guru-dakshina (gift to guru), after which the guru would recite the snataka-dharma from the Taittiriya Upanishad. This would be followed by a homa (fire ritual) and snana (ceremonial bath). (Kane, 1941)

We all know the famous shloka
Maatru devo bhava,
Pitru devo bhava
Acharya devo bhava
Atithi devo bhava
This verse stating that one’s mother, father, teacher and a visiting guest are all equivalent to Devata comes from the Taittiriya Upanishad, which also was recited during the Samavartana. Equipped with holistic knowledge and blessings from the guru, a graduate or vidya-snataka (one who is bathed in learning) would be ready for the next stage of life – usually teaching and of course, marriage.
read more at indiafacts.org

Posted by Pradeep Singh at 9:26 PM No comments:

Appeasement of Muslims By Congress Leaders The reason why Indian history was not rewritten much after 1947, is to found in our freedom struggle. Gandhi returned to Indian in 1915 and after Lokmanya Tilak’s death became the leader of the freedom struggle. Gandhi himself had shamelessly supported the British during the British -Boer war, British-Zulu war (also known as Kaffir Wars) and the World War I. In fact, Gandhi volunteered to organize a brigade of Indians to put down the Zulu uprising. Sergeant-Major Gandhi, the deputy commander of his cops – himself carried the stretcher of the mortally wounded British commanding officer from the Zulu war battle field for miles over the sun-baked veldt. Thence he was awarded Victoria’s coveted War Medal for valor under fire. However by the time of his return to India Gandhi was so obsessed with Ahimsa (non-violence) that he condemned Rana Pratap, Shivaji and Guru Gobind Singh for their armed struggle.  Savarkar proclaimed “We Hindus on our own can win our freedom from the British“. Gandhi lacked Savarkar’s confidence and conviction. This led to his perpetual capitulation to Muslim demands and finally culminated in the horrors of partition. After the horrible Mopla riots in 1921 when over 5000 Hindus were killed by the Moplas of Malbar. But Gandhi had no hesitation calling them “My brave Mopla brothers!” In December 1926 when a fanatic Muslim Abdul Rashid killed Swami Shraddhananda who had converted thousands of Muslims to Hinduism, Gandhi immediately pleaded that Brother Abdul Rashid’s life be spared. But he refused to plead for life of Bhagat Singh and others only six months later. In 1938 Hindus launched an unarmed struggle for their legitimate rights in Hyderabad state, Gandhi did not support them and said “I do not want to embarrass the Nizam”. Congress was in power in C.P., U.P., Bihar, Orissa, Bombay and Madras from 1937 and 1939. Not once the Congress ministers stood up to unreasonable demands of the Muslims. The same lieutenants became chief ministers of various states in 1946. After independence Nehru’s secularism always meant capitulation to Muslims and anti-Hindu politics. Thus under Nehru years and early Indira Gandhi rule Gandhian appeasement hangover was still intact. It must be noted that during all the Lok Sabha elections after 1947, the Congress party todate has NOT EVEN ONCE received even 50 percent of popular vote. Thus a 10 percent vote swing can change the power equation in New Delhi. Under these conditions, Muslim vote bank had disproportionate importance. Thus in later years (particularly after emergency) capitulation to the Muslim demands and appeasement became a tool for staying in power. In the zeal for retaining the power, true history has become the first victim. 8. Effect of Appeasement of Muslims Encyclopedia of Britannica says “Hindu Architecture .. It should be noted that there exists in India a vast technical literature known as Shilpa Shastra.. dating back to Gupta period perhaps much earlier, the medieval compilations are still in use by Indian Architecture.” The first victim of appeasement is Hindu architecture which is not taught at all in the Architecture and engineering schools. What ever insignificant part is taught is taught with Greek or Roman titles under Indo-Sarcenic architecture.Read More at www.mysteryofindia.com/2014/08/how-british-distorted-indian-history.html
Posted by Pradeep Singh at 9:21 PM No comments:

Destruction of The Indian System of Education by British 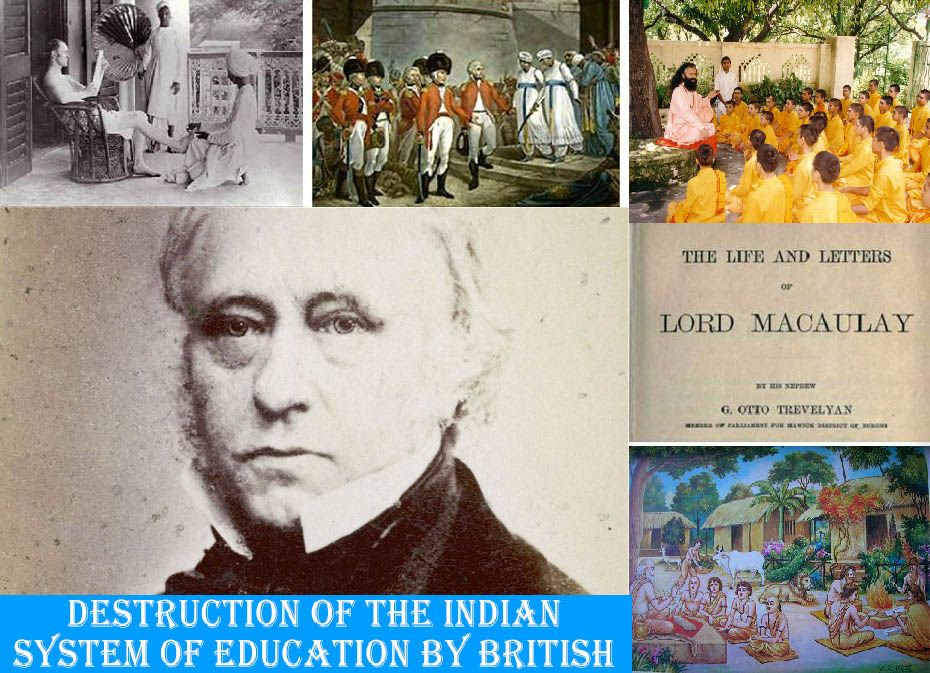 Till the British started ruling India most of the castes were educated and prosperous but the delicate policies of the British are responsible for their later condition. The Brahmins who were supposed to set the standards of behaviour in the society were targeted, and when they strayed away from their path they were blamed for the condition of the other castes.During the time of the East India Company and later, in the British rule, there seem to have been two motives working in the minds of the rulers: plundering the wealth of this land and the 'white man's burden ' of civilizing the natives (the term used by them to refer to all Indians). We shall see, how in order to achieve these ends, the British so cleverly played their cards that even after fifty years of independence we still continue to exist in a state of stupor, unable (and even unwilling!) to extricate ourselves from one of the greatest hypnoses woven over a whole nation. Perhaps many of us do not know that India was the richest land till the British came here. Whereas Britain's share in world exports before was only 9% as against India's share of 19% today our share is only 0.5%. Most of the foreigners came to India in search of her fabulous wealth. Ernest Wood, in the book "A Foreigner defends Mother India" states, "In the middle of the eighteenth century, Phillimore wrote that 'the droppings of her soil fed distant regions'. No traveller found India poor until the nineteenth century, but foreign merchants and adventurers sought her shores for the almost fabulous wealth, which they could there obtain. 'To shake the pagoda tree' became a phrase, somewhat similar to our modern expression 'to strike oil'." In India 35% to 50% of village lands were revenue free and that revenue was utilised for running schools, conducting temple festivals, producing medicines, feeding pilgrims, improving irrigation etc. The British in their greed brought down the revenue free lands down to 5%. When there was a protest they assured Indians that the government would create an irrigation department to take care of irrigation, an educational board to take care of education. etc. The initiative of the people was destroyed. But the rulers found to their chagrin, that though they had conquered this nation, it was still strongly rooted in its own culture. They found that as long as the nation was aware and even proud of its traditions, their 'white man's burden' remained as 'heavy and cumbersome as ever'! India had, at that time, a very well spread system of education and that system had to be made ineffective for their purposes. Now, most of us are taught to believe that the education was in the hands of the Brahmins and in Sanskrit medium and that the other castes had no education. But here are the facts about how the British destroyed the Indian educational system and made one of the most literate nations illiterate.
http://home.iitk.ac.in/~hcverma/Article/Article%20by%20IITM%20student%20in%20Indian%20education.pdf

Posted by Pradeep Singh at 9:14 PM No comments: