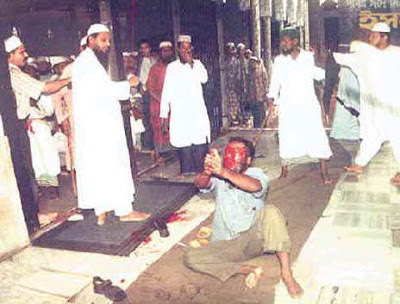 Posted by Pradeep Singh at 2:44 PM No comments:

Posted by Pradeep Singh at 10:56 AM No comments:

WILL India turn in Islamic or Christian State with Hindu divided .Yes possible.

Imagine an India where after hundreds of years of dogged resistance Hindus fail to rise again, the end of the fourteenth century – a Delhi laid waste by the invasions of Timur and the horrors that lay in his wake. Imagine no renaissance of the warrior clans in Rajasthan under Rana Kumbha and the raising of the tower of victory. Imagine no resurgence in the south under the inspirational leadership of the Sangama brothers to create the golden empire of

Vijaynagar. Imagine no hosts of fearless Sadhus and Saints traversing the subcontinent spreading the message of dharma and bhakti.
Imagine there was no empire of the Gajapati kings in Orrisa or the Ahoms in Assam giving the Mughals a resounding defeat in 1671. Imagine a land beaten down by the forces of Islamic Imperialism after centuries of struggle and bloodshed eventually falling by the 1400′s to the Crescent banner of the Arabs and Turks. Is it so hard to imagine ?
Then look back upon history and see the rise of the Sassanian Empire in Persia – the inheritors of the Parthians who faced the might of the Roman Empire at its peak defeating the legions under Marcus Crassus – the same Sassans under their Emperor Shapur who defeated the Roman Emperor Valerian at the Battle of Edessa in 260 CE and after capturing him used him as a footstool for the remainder of his captivity.
The Sassans who faced the Byzantines in perpetual conflict and turned Zoarasterism into a state religion.The rise of the Arabic Islamic Caliphate put an end to the once mighty Sassanids – from 633 CE to the final elimination of their remnants by the Ninth Century – the imposition of the Jizya, the submission of the majority non Muslims to dhimmi status led the eventual collapse of the ancient religion of Zoroaster with their scattered remnants fleeing from persecution to India.

Further west, the once all encompassing Hellenic culture which produced Socrates, Aristotle, Democritus, Plato and many others fell to the missionary zeal of early Christianity. The Byzantines became the vanguard of the Eastern Church and soon the great library of Alexandria fell together with the Oracle of Delphi and the destruction of the Sybylline books. the ancient lands of Egypt, West Asia and Greece were Christianised by the fifth century of the Common Era and the banning of the practice of ‘Pagan’ religions and the smashing of their temples led to an almost total Christianisation of the region by the early sixth century CE.
Their great rivalry with the Sassanids of Persian was partly predicated upon religious rivalry between the church and advocates of the fire temples of Zoaraster. Both were however eclipsed by the rise the Islamic Caliphate. With remarkable energy and speed the once glorious Sassanids fell into oblivion and the Imperial cult of Zoarasterianism was reduced within generations to the a few scattered remnants far from the scenes of their once exalted status.
Within a few hundred years and the decline of the Byzantines in the face of determined Arab followed by Turk incursions the majority of the region converted to Islam and in a few generations became amongst the most fanatical votaries of their new faith.

In the vast open regions of Central Asia lay the fabled Silk Route. Mighty Empires rose and fell and the wild horse borne archers of the steppes were feared for the skill and ruthlessness. Over all ruled the benign image of the Buddha – the quintessential image of peace and serenity created a curious dichotomy between the nomadic tribesmen and the practitioners of non violence.
The great statues of Bamiyan, the organised and missionary activities of the Sangha led to whole masses of the population becoming Buddhists under the tutelage of the monks vestiges of which we can still see in the societies of Burma, Sri Lanka and Tibet. The grant empire of the Kushans which lay straddled across the Silk route saw the Emperors venerating the Buddha and facilitating his message acorss the face of the known world.
In 634 the Battle of Talas heralded the defeat of the Chinese empire by the Arabs and gradual Arab penetration and Islamisation of the region. Within a few centuries the Buddhists were fleeing eastward and towards India – those that remained saw the graven images of ‘But’ being flung to the ground and trampled underfoot as the advocates of the desert faith called the faithful to prayer. Today hardly an echo of the ancient faith of Buddhism remains in the region which can be most clearly seen in the once Buddhist stronghold of Afghanistan.
An Arab invasion stormed into Sindh in 666 CE before a determined Hindu coalition under the legendary Bappa Rawal defeated them in the Battle of Rajasthan in 738 CE bringing to an end the eastward expansion of the Caliphate, much like the westward expansion being stopped at the Battle of Tours by Charles Martel in 732 CE.
The aforesaid conversion of Central Asia led the incursions of the Turk tribes westward to fight the Crusaders and further to the east towards the fabled land of India. Centuries of resistance were eventually overcome and the kings of the frontiers known as the Hindu Shahis fell.A veritable tide of bloodshed that had few parallels in history followed. Into this cauldron of bloodletting the multi ethnic and multi religious region of South Asia was subjected to an orgy of violence and hatred that beggars few comparisons in history. Echoes of this carnage can be seen in the endless wanderings and sufferings of the ‘Gypsies’ around the world as they fled fleeing from India to escape the horrors.

The ancient seats of learning of Nalanda and Taxila were razed to the ground and the monks massacred in the sacred premises where students from across three continents would come to learn. Stupas, Temples and Holy sites were leveled to the ground or converted into mosques. Swathes of people bereft of their political and spiritual leadership were converted to the faith of the invaders.
The Buddhists seemed to be particularity susceptible in this case with their population bereft of guidance following the destruction of the stupas and the slaying of the monks. The once widespread religion of the Jains were whittled down to a handful of secretive and hidden trading clans where it remains today. It is thought that the obliteration of the materialist and atheistic Carvakas is dated from this time.
The Hindus ensured however – the resistance following the Battle of Tarain in 1192 confounded the invader. The genocidal forces of monotheistic fervour was confronted with implacable resistance – the resistance continued from the towns, to the deserts, to the forests and far into the mountains. And so amidst the raging wars and the collapse of the medieval Indian civilisation the Turkic forces suffered terrible losses.
And so Muhammed Ghori was slain by Hindu rebels in Punjab, and so Raziya Sultan was killed in revenge by the Hindus in Mewat and so tens and thousand gave their lives in a furious attempt to resist forced conversion, enslavement and submission – And so just decades after the Battle of Tarain the nascent Sultanate in Delhi was close to collapse – According to the historian, Firishta it was the constant immigration of Muslims into India that kept their momentum up – the endless cycle of war and resistance claimed the lives of so many Arab, Turk and Persian warriors that a constant flow of migration was required to maintain the forces of Jihad in the land of the Pagans. And just as Rome and Greece fell to Christianity in the early part of the millennium and the Near East , Persia and Central Asia went under the banner of Islam it was expected that India too would inevitably fall. 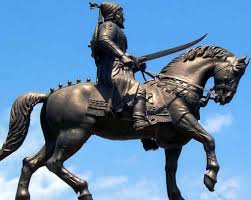 But the reality defied the lessons of history – by the 1500′s the majority of the subcontinent was under the rule of the resurgent Hindus – the teachings of the wandering Saints combined with the fervour of an undefeated dharma was only brought to a tenuous compromise by the Mughal emperor Akbar with his rejection of formal Islam.
This compromise was shattered by the return of fanaticism under the iconoclastic rule of Aurangzeb and amidst the shattered remains of the Mughals rose again the Rajputs of western India, the Gurkhas in the far northern hill, the Ahoms in the jungles and forests of the east, the Jaats in the plains of Hindustan and above all the rise of the Maratha Empire from Shivaji the Great to the conquests of Baji Rao from 1720-1740.
E Keane characterised the finality of this resurgence culminating in the rise of the Maratha warlord Mahadji Sindhia as the Hindu re conquest of India – This reconquest was only stopped by the entry of the colonial powers and after a desperate struggle culminating in the bloody rising of 1857 British control was established over the subcontinent. Since independence 90 nears thereafter has seen the creation of a fast rising economic and military power of modern day India adjoining a militarised state of Pakistan veering on the edge of a collapse into medieval theocracy.
Now imagine once again the alternative – Imagine an India where Islam had emerged triumphant – imagine 1.2 billion more adherents to Islam in a single stroke increasing the worlds population of Islam to almost 40% of the total – Imagine how history would have changed – how fanatical hordes pouring from the shores and borders of South Asia into China – into South East Asia, across the shores into Africa. Imagine a war on terror with no end.
Imagine also a world with no yoga, with no spirituality, with no selfless teachers reaching out across the globe, with no Ayurveda, with no Mahatma Gandhi, no Swami Vivekananda , with no link to the ancient past which has all but been obliterated from the majority of the globe.
Think then of the sacrifices made for the sake of Dharma- think of the millions who gave their lives over the blood soaked centuries think of the determined and relentless resistance provided generation after generation rising with arms and faith again and again – think of how the history of the world would have changed had the Hindus failed.
Charles Martel is called the saviour of Europe following the Battle of Tours but how many today remember the Battle of Rajasthan, Raja Bhoja, Shivaji, Baji Rao and countless others – Remember the struggle that has convulsed South Asia and the Hindus for a thousand years and the rise once again into the modern world of an ancient civilisation undefeated and undaunted.
From Hindu history

Posted by Pradeep Singh at 10:51 AM No comments: