The Clintons and her rt hand Saudi women Huma-: A poison for USA,WORLD-Twenty Five Years of hostility towards India:

The Clintons: Twenty Five Years of hostility towards India:
Look what Hillary's rt hand women was saying to BILL Clinton-Bill-Clinton-bombed-Iraq-distract-Monica-scandal-Huma-Abedin-s--claimed 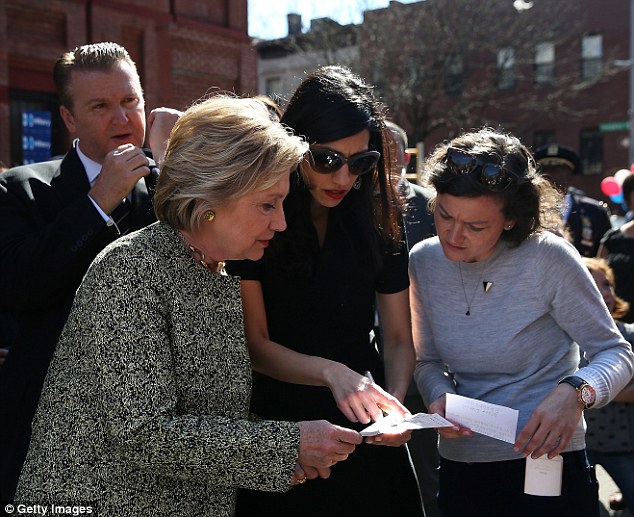 CLINTONS ARE EQUAL TO CORRUPTION-
Mrs. Clinton plainly has lied about her e-mails, repeatedly, and then lied about lying about them. The new e-mails released in response to ongoing litigation from Judicial Watch include 20 previously unseen exchanges between Mrs. Clinton and her chief aide, Ms. Abedin, which now brings the total number of official, work-related e-mails Mrs. Clinton failed to turn over to investigators to just shy of 200 — so much for those claims that these were private communications about yoga classes and Chelsea’s wedding plans. It is clear why Mrs. Clinton did not want to release these e-mails: They detail precisely the Clinton Foundation corruption that critics have long alleged. Specifically, the e-mails detail Huma Abedin’s role – while she was on the State Department’s payroll — acting as a fixer for the Clinton Foundation, making sure that influential friends overseas, especially donors, had access to the U.S. secretary of state in order to keep their egos inflated and their wallets deflated. (function($){ var swapArticleBodyPullAd = function() { if ($('body').hasClass('node-type-articles')) { var $pullAd = $('.story-container .pullad').addClass('mobile-position'); if (window.matchMedia("(min-width: 640px)").matches) { if ($pullAd.hasClass('mobile-position')) { $pullAd .addClass('desktop-position') .insertBefore('.article-ad-desktop-position'); } } else { if ($pullAd.hasClass('mobile-position')) { $pullAd .addClass('mobile-position') .insertBefore('.article-ad-mobile-position'); } } } }; $(window).on('resize', function(){ swapArticleBodyPullAd(); }).resize(); })(jQuery); Abedin already admitted during legal proceedings that one of her assignments while working at State was seeing to “Clinton family matters,” which is inappropriate on its face. But what those matters consisted of is a fairly obvious case of rewarding Clinton Foundation donors with access to the nation’s No. 1 diplomat. Who were those donors? Crown Prince Salman of Bahrain wanted a sit-down with Secretary Clinton but was rebuffed; Clinton Foundation executive Douglas Band intervened through Abedin to try to find a work-around for the crown prince, who gave donations to the Clinton Global Initiative totaling $32 million through 2010. Donations to the Clinton Foundation came in from the kingdom itself and from the state oil company. Band also intervened to secure a visa for a foreign athlete held up because of his criminal record, doing so at the behest of donor Casey Wasserman, a Hollywood sports-entertainment mogul, whose foundation has contributed between $5 million and $10 million to the Clinton Foundation (here Abedin demurred). Others who got the royal treatment via Band and Abedin: Slimfast boss S. Daniel Abraham (another $5-million-to-$10-million donor), Clinton Foundation benefactor and Clinton campaign donor Kevin O’Keefe, Democratic fundraiser Maureen White ($75,000), telecom entrepreneur and Democratic fundraiser Jill Iscol ($500,000 to $1 million, also co-chair of Clinton’s finance committee during her Senate race), and other Democratic players and corporate benefactors.


Now let us see what and how CLINTON WORK AGAINST INDIA-
1992: Arkansas Governor Bill Clinton promises during his presidential campaign that he will use Super 301, a law designed to impose trade sanctions impacting India
1992: US Trade Representative Carla Hills who turns out to be a Hillary Clinton supporter imposes trade sanctions on India under Super 301
1992: Joe Biden Amendment blocks sale of Russian Cryogenic engines to India
1993: Bill Clinton blocks sale of Cray Supercomputers to India
1993: Bill Clinton administration to sell Cray Supercomputer to China
1993-94: Bill Clinton does not bother to appoint ambassador to India for more than a year in order to insult India
1994: Clinton's close friend and Assistant Secretary of State Robin Raphel says Kashmir should not be part of India
1994: Bill Clinton supports Pakistan on Kashmir and accuses India of human rights violations
1994: Bill Clinton administration official sets fire to Indian skirt on TV and declares them a fire hazard hurting Indian textile sector and destroying livelihoods of millions of families who depend on the sector
1994: Bill Clinton targets Indian pharmaceutical industry for destruction by foisting TRIPS provisions as part of WTO
1994: Bill Clinton administration offers F-16 planes to Pakistan and Robin Raphel announces offer from Delhi
1994: Bill Clinton administration pursues carrot and stick policy (carrots for Pakistan, sticks for India): announces F-16s for Pakistan and threatens India with trade sanctions under Super 301
1995: Bill Clinton Appointee declares Indian scarves flammable and orders recall hurting Indian textile industry
1995: Bill Clinton administration foists bad Enron deal on India and forces Indian government to provide guarantees
1996: Bill Clinton sets up 'Advisory Committee on Religious Freedom Abroad' with aim of forcing Hindus in India to convert to Christianity and this Committee eventually recommends the creation of the hate group USCIRF
1997: Bill Clinton's friend and Assistant Secretary of State Robin Raphel announces Clinton administration's policy of opposing Russian collaboration with India for electricity generation and weapons of defense
1998: Bill Clinton imposes sanctions on India
1998: Bill Clinton preaches to India on nuclear tests and simultaneously announces MFN status for China
1998: Bill Clinton's Secretary of State Madeleine Albright spews vitriol on India and calls India's actions "felony against the future."
1999: Bill Clinton tries to impose stringent labor standards on India that would destroy Indian businesses and eliminate competition for Clinton's cronies
2000: Bill Clinton administration interferes in India and organizes hearing on "human rights violations" based on fabrications about violations of religious freedom
2000: Bill Clinton visits Pakistan on India trip and thus equates India with Pakistan and confers legitimacy on Musharaff who took power in a coup
2001: Hillary Clinton does not oppose Senate vote to remove sanctions on Pakistan
2001: USCIRF, a hate group and creation of Bill Clinton administration, spews vitriol and stereotypes Hindus as "serious violators of religious freedom" and demands that US government ensure that [forced] conversions be permitted in India
2002: USCIRF, a hate group and a creation of Bill Clinton administration, attacks India and Hindus and uses terms like "communal violence" while blaming Hindus; it simultaneously praises Musharaff for curbing "violence in the name of religion" in Pakistan. Note the careful usage of words to describe religious violence in Pakistan.
2003: Democrat Tom Daschle appoints anti-Hindu zealot Preeta Bansal to USCIRF, the hate group created by the Clinton administration, and is cheered by anti-Hindu Christian activists including the violent terrorist Jayachand Pallekonda
2004: Hillary Clinton exhibits bigotry and claims Mahatma Gandhi ran a gas station in St. Louis
2005: Hillary Clinton causes outrage by calling for India to give up nuclear program and reconcile itself to non-proliferation treaty
2005: Bill Clinton calls for giving aid money to terror group LTTE
2006: Hillary Clinton who is part of the Senate India Caucus stabs India in the back and votes YEA on 'killer amendment' to bill in US Senate that deals with Indo-US Nuclear deal; the amendment is intended to kill the deal and set back Indo-US relations by 30 years
2007: Hillary Clinton booed when she defends Musharaff and attacks Senator Obama for saying he would attack Pakistan and take out Osama bin Laden
2007: Hillary Clinton's fundraiser is organizer of LTTE Heroes Day which celebrates terrorists
2008: Hillary Clinton once again attacks Senator Obama for promising to act against Pakistan for supporting terrorists
2009: Hillary Clinton says she is proud to release report of anti-Hindu hate group USCIRF which was formed on the advice of a Committee consisting of Christians, Muslims and others but not Hindus (Click here to read about Hindus alone being excluded by Bill Clinton when the Office of Religious Freedom was created)
2009: Hillary Clinton backs talks with Taliban
2009-2012: Hillary Clinton carries on a get-Modi campaign against Narendra Modi
2012: Hillary Clinton declares 'religious freedom,' a euphemism for Christian proselytism (primarily in the Indian subcontinent), a foreign policy imperative
2013: Clinton Global Initiative partners with anti-Hindu evangelical Christian group World Vision
2014: Bill Clinton friend and former Assistant Secretary of State Robin Raphel investigated by FBI for spying for Pakistan
2015: Huma Abedin, a key member of Hillary Clinton's 2016 presidential campaign is the daughter of a Pakistani mother and her father worked for an Islamist in Saudi Arabia with ties to Al Qaeda
2015: Hillary Clinton's running mate, Christian missionary and India-baiter Tim Kaine admits Pakistan has connections to terror group LeT but praises Pakistan for fighting terrorists and advises India to have a better relationship with Pakistan
2016: Clinton Foundation donor linked to Pakistani arrested for corruption and harboring terrorists
2016: Hillary Clinton picks Christian missionary, Hindu-baiter and India hater Tim Kaine as VP running mate" (Arvind in "American Thinker")
(via Ekal Sanatana and Rajesh Ramachandran)
how-close-are-huma-abedin-and-hillary-clinton
Posted by Pradeep Singh at 11:11 AM No comments:

Email ThisBlogThis!Share to TwitterShare to FacebookShare to Pinterest
Labels: bill clinton, clinton, NO TO CLINTON 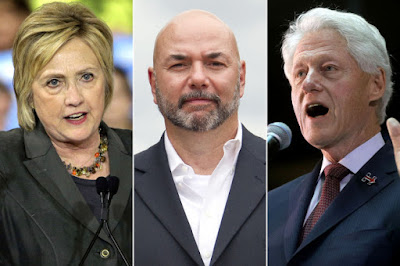 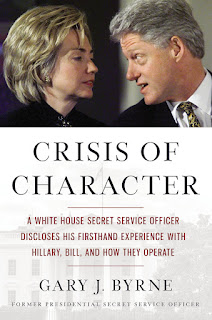 Posted by Pradeep Singh at 10:23 PM No comments: