US congressman return from Syria with Proof Obama Funded ISIS, Exposes it Live on CNN 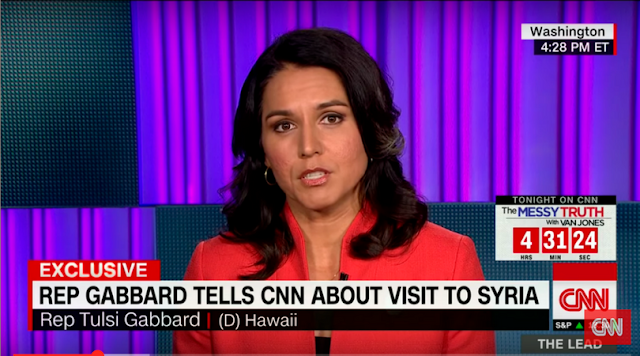 US congressman Tulsi Gabbard found truth that Obama team in fact created ISIS and helping Al qaida and nusra front by not attacking them and giving arms. Remember when USA army dropped off big load of arms for ISIS and it says that was mistake - it was done knowingly. They should be booked in international court of Hauge for supporting terrorism and killing many civilians. Obama was a Son of Muslim and he helped Saudi spread terrorism

Tulsi Gabbard revealed solid proof that the Obama administration was funding the terrorist groups.
Tulsi said ,They asked me why is the United States supporting these terrorist groups who are destroying Syria – when it was Al-Qaeda who attacked the United States on 9/11, not Syria. I didn’t have an answer for that.“
Jake Tapper, responded with: “Obviously the United States government denies providing any sort of help to the terrorist groups you are talking about, they say they provide help for the rebel groups.“
Gabbard then responded to Tapper saying, “The reality is, Jake, and I’m glad you bought up that point. Every place that I went, every person I spoke to, I asked this question to them. And without hesitation, they said ‘there are no moderate rebels, who are these moderate rebels that people keep speaking of?’
“Regardless of the name of these groups, the strongest fighting force on the ground in Syria is Al-Nusra or Al-Qaeda and ISIS. That is a fact. There are a number of different other groups, all of them are fighting alongside, with or under the command of the strongest group on the ground that is trying to overthrow Assad.”

Posted by Pradeep Singh at 7:36 AM No comments:

ISIS GROUP TO ATTACK SAUDI NEXT. COME ON IN.

Islamic State leader Abu Bakr al-Baghdadi called for attacks against the rulers of Saudi Arabia in a speech purported to be in his name on Thursday, saying his self-declared caliphate was expanding there and in four other Arab countries.

Baghdadi urged supporters in Saudi Arabia, the world's top oil exporter, to take the fight to the rulers of the kingdom, which has joined the U.S.-led coalition in mounting air strikes against the Islamic State group in Syria.
"O sons of al-Haramayn...the serpent's head and the stronghold of the disease are there...draw your swords and divorce life, because there should be no security for the Saloul," Baghdadi said, using a derogatory term to refer to the leadership of Saudi Arabia.

Haramayn is a reference to the two holiest places in Islam, both of them in Saudi Arabia.
Since Islamic State began an offensive in Iraq in June, Saudi Arabia has sent thousands of troops to the border area.
The speech was not dated but carried a reference to a Nov. 7 U.S. announcement that President Barack Obama had approved sending up to 1,500 more U.S. troops to Iraq. Obama has said the United States aims to degrade and eventually destroy Islamic State
Islamic State has seized swathes of Syria and Iraq and in June declared a caliphate over territory it controls. Baghdadi said he had accepted oaths of allegiance from supporters in Libya, Egypt, Yemen, Saudi Arabia and Algeria.


"We announce to you the expansion of the Islamic State to new countries, to the countries of the Haramayn, Yemen, Egypt, Libya, Algeria," Baghdadi said. The speech was transcribed in Arabic and translated into English.
Although supporters have pledged allegiance to Islamic State in countries including Lebanon, Pakistan and Afghanistan, Baghdadi singled out only those five states, picking countries where sympathisers have a strong base and could mount attacks.
He added, however: "Oh soldiers of the Islamic State...erupt volcanoes of jihad everywhere. Light the earth with fire against all dictators."
Referring to U.S.-led military action against his group, Baghdadi said: "Despite this Crusade campaign being the most fierce and severe of all, it is the greatest failure."
"We see America and its allies stumbling in fear, weakness, impotence and failure."
Referring to Yemen, where Shi'ite Houthis captured the capital Sanaa in September, forcing the government to resign, he said: "Oh soldiers of Yemen...be harsh against the Houthis, they are infidels and apostates. Fight them and win against them."
Baghdadi also congratulated supporters in Egypt's Sinai for starting jihad against what he called the "dictators of Egypt". He also urged supporters in Libya, Algeria and Morocco to prevent secular groups from ruling.
After Baghdadi's speech, Egyptian militant group Ansar Bayt al-Maqdis, which swore allegiance to Islamic state this week, changed its name to Sinai Province on the Twitter feed claiming to represent it.

Posted by Pradeep Singh at 12:41 PM No comments:

London: ISIS fighters have told families in Iraq to hand over their daughters for sex, saying that the women must sleep with militants in order to cleanse themselves.

According to the Mirror, leaflets in the captured cities of Mosul and Tikrit claim the women - virgins or not - must join jihad, or Holy war, and cleanse themselves by sleeping with militants.

What is litteral meaning of NIKAH- Legal copulation- It is not marriage.

Read more at- muslim terrorists issued decree for unmarried women participate jihad sex
In every report of this sort, Muslims worldwide deny the phenomenon. However, Islamic Muruna which was issued by Sheikh Yusuf Qaradawi, the most prominent Sunni theologian in the world explains not only the sanctioning of Misyar Marriage, but “the process of permitting evils”, altogether by “sanctioning prohibitions for the sake of an interest”. This “interest” regards Jihad, which is very well documented in his volume Fiqh Al-Muwazanat (The Jurisprudence of Balance) on his own website. This jurisprudence, as mad as it sounds, permits “reversing Sharia rulings” in order to “gain interests”. Imagine what “sanctioning prohibitions” means. If it says, “thou shall not kill” now it’s “thou can kill” for an “interest”.
Qaradawi explains that Sharia under war can permit almost anything:


“Sharia’s ability to be flexible and inclusive is that it cares for their needs while excusing the burdens Muslims have to endure. For the sake of their destiny, it was made lawful for them to have exceptions from the law that are appropriate for them since these exceptions match their general goals to make it easy for humanity by removing the chains of [Sharia] rules they were made to adhere to in previous Sharia rulings.”

By reversing Islamic law, Muruna concludes an amazing doctrine that sanctions all prohibitions:


“When evil and harm conflict as necessities demand, we must then choose the least of the two evils or harms. This is what the experts in jurisprudence decided … if interests and harms/evils conflict, or benefits conflict with evils, what is then to be decided is to review each benefit and each harm and its consequences, so the minor evils are forgiven for the sake of the greater long-term benefit. The evil is also accepted even if that evil is extreme and normally considered deplorable.

And this is how Jihad and prostitution becomes sanctioned.
Misyar marriage, for example, is nothing more than legalized call girls and has branches globally including in the U.S. It was first sanctioned in Egypt and Saudi Arabia to only spread to several other Muslim nations. There are many websites used to facilitate the transactions. The most popular is click here for ‘lonely’ Muslim men who are on the road and are allowed to have sex with local Muslim women (who advertise themselves) in the area where the lonely Muslim male is traveling in which he can order his bride in the comfort of his hotel room by the touch of his keyboard.

Mesiara Online screenshot.
Call girls are permitted in Islam and even with Muslim women donned with Hijabs. Misyar means sex for the travelers. While prostitution exists in every corner of the globe, its sanctification with fanciful words is what is particularly at issue here. The word prostitution is stealthily removed since there is a transaction established that says “marriage” instead.
Misyar is all over the Middle East and is sanctioned by many top Imams. The Muslim “conservative” world is much more disgusting than one can imagine. It’s actually far more like western liberalism than western conservatism. Misyar marriages are rarely if ever discussed in Western mainstream media, perhaps – at least in part – for that reason.
Misyar literally means the traveler marriage in which women must relinquish the care owed to them by a husband. Sheikh Ahmed al-Kubaissi, from the United Arab Emirates, thinks there is no formal problem with misyar marriage. After all, it fulfills all the demands of Islamic law. Wealthy Muslim men sometimes enter into a Misyar marriage while on vacation, in order to have sexual relations with another woman without committing the sin of adultery. They usually divorce the women once their holiday is over.
However, if this is understood by both parties at the time of concluding the marriage contract (and this is usually the case), this would constitute a fixed time period.
The Sheikh of al-Azhar Mosque – Muhammad Sayyid Tantawi – and theologian Yusuf Al-Qaradawi note, in their writings and in their lectures, that a major proportion of the men who take a spouse in the framework of the misyar marriage are already married men.
Many of the men involved would not marry a second wife within the regime of normal Islamic polygamy because of the heavy financial burdens, moral obligations & responsibilities placed on the husband. Instead, they opt for the option of Misyar marriage when the theologians declare it licit. Amongst the Shia Muslims, according to a Fatwa for Ayatollah Sistani, Mut’ah is permitted but Misyar is considered to be prohibited by Sunnis. While both condemn the other sect accusing the other side of immoral acts, there is much similarity between Mut’ah and Misyar. Both require all the conditions applicable to Nikah (marriage) with the exception of fixed expiration date in Mut’ah. Every marriage by Sunnis requires two adult male witnesses, whereas in Shī‘as, the two witnesses required in either nikah-e-Mut’ah or in ordinary marriage may be just Allah and the Qur’an.

Posted by Pradeep Singh at 10:38 AM No comments: