Bhatta Mazar- A place where Hindus were massacred by Muslims in Kashmir- History forgotten by Hindus also.

The advent of Islam in Kashmir was considered from the 14th century and it is believed that the introduction of Islam has created unprecedented problems and led to exodus of Kashmiri Hindus, the aborigines, from Kashmir. Prof. K.L. Bhan has identified 7 exoduses of Kashmiri Hindus in seven different epochs starting from 14th century onwards and finds that their number has been reduced from being majority to minority in their own land because of constant persecution and forced conversions. Many Kashmir Hindus were either forcibly converted to Islam or they have been killed or left Kashmir. 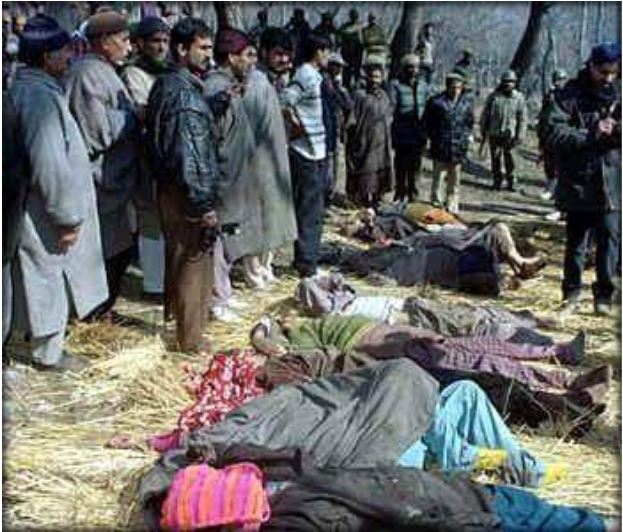 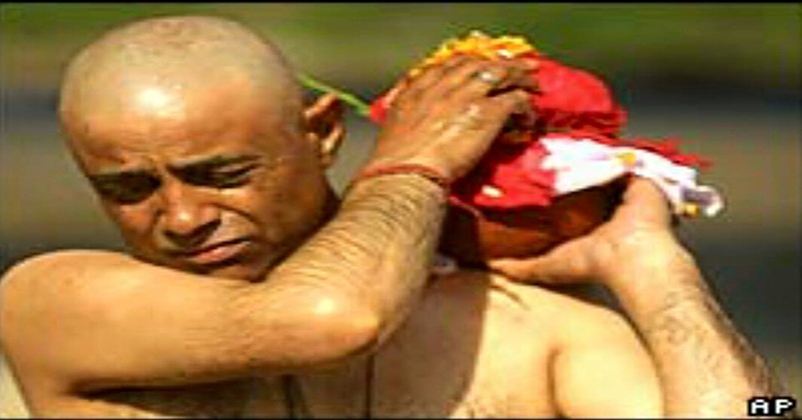 The First Exodus (1389-1413)
Scheming wily and guily Shah Mir became the founder of the Muslim rule in Kashmir. By encouraging inter-marriages he poisoned and weakened the family life of the Kashmiri Hindus to the advantage of the Muslim minority as this tactics built a reliable and strong base/plinth for the propagation of Islam in Kashmir. By fraudulently getting Kota Rani, Bhatta Bhikshana and Bratta Autar murdered he removed forces of resistance from his way and became instrumental in letting Islam set its root deep in Kashmiri soil. The counselors of Kota Rani did not let her have tit for tat, following their ethos of non-violence, reverence for moral and ethical values.
Terrorised by Tamur the Lame – Syyid Mir Ali Hamdani along with 700 Sayyids, his followers, landed in Kashmir and drove a wide and deep wedge between the majority Hindus and minority Muslims. He dictated the Sultan Qutubud-Din to make the persecution and torture of the KPs a state policy. The code he prescribed for the sultan was a model of hatred, distrust, intolerance, bigotry and malignity against the KPs. He compelled the Sultan to officialise the presecution and massacre of KPs unless they embraced Islam. He is the architect of desecration and demolition of the Kalishree temple near Fatah Kadal in Srinagar and raising on its plinth a mosque known as Khanqah-i-Mulla. With his repressive and precautionary measures backed by state terrorism he achieved the conversion of 37,000 KPs to Islam during the latter two of his three visits. The Sayyids headed by Mir Ali Hamdani openly preached extermination of Hindu religion and Hindu politics from the soil of the Kashmir in order that Islam might flourish and get unshakably entrenched in their place. Following in his father’s footsteps Mir Mohamad Hamdani urged Sultan Slkandar (1389-1413) notoriously known as the iconoclast (Sikandar but-shikan) to wipe out infidelity (Hindus) root and branch, from Kashmir and let not even a weed of it survive. The two reinforced by the rabid neo-convert Malik Saifudin unleashed a massive war against KPs with the target of genocide of this highly cul­tured people. Sikandar having pawned his soul to the Sayyids threw all norms of civilized Ilfe and tolerance to winds and issued an atrocious and barbaric Government decree or­dering the KPs to opt for conversion or exile, flight or death. They let loose the floodgates of a reign of terror on the KPs to pressurize them to embrace Islam. Sikander enjoyed and exulted in breaking down images of Hindu deities. No temple anywhere in the city town or village escaped paying the heavy toll. Numerous Hindus fled, numerous were converted and numerous were brutally killed. Many poisoned themselves. This marks the first ominous exodus of the Kashmiri Pandits from their native fair homes. It is this mass migration that occasioned the plight of KPs to the neighbouring regions of Kishtwar and Bhadarwah via SMITHAN pass and to various provinces of India via Batote (Bhatta wath, path of the Bhattas or Kashmiri Pandits).
In the wake of this damned decree of Sikandar, seven mounds of the sacred thread of the murdered Brahmans were burnt by Sikandar and all of their sacred books were thrown into the Dal Lake. The KPs numbering over one lakh were drowned in the Lake and were burned at a spot in the vicinity of Rainawari in Srinagar City known as Bhatta Mazar (The grave yard of the Bhattas, the KPs) beyond present day Jogilanker. According to the living memory of the KPs only eleven KP families stayed back in Kashmir, the rest, rather than abandoning the religion of their father’s, chose to migrate leaving behind their beloved homes hearths, lands and everything, only to protect their religion and faith.
Jonraj, the contemporary historian draws a graphic picture of the traumatic experiences of the first exodus. Crowds of Hindus ran away in different directions through passes and bypasses. Their social life was totally disrupted, their life became miserable with hunger and fatigue. Many died in the scorching heat. Some disguised as Muslims roamed about the country searching for their distressed families. Hindus lolled out their tongues like dogs, looking for dog’s morsel at every door. (Jonraj: Kings of Kashmir). Then the Sultan exclaimed proudly that he had succeeded in extermi­nating all traces of Hinduism from the valley by massacring the Hindus, by ravaging, looting and ransacking their prop­erties and more than most by kidnapping and raping there women folk. Jonraj laments the trampling of the Hindu ethos by the Yavanas (Muslims) whom he compares to locusts descending on and destroying a paddy field.
The Second Exodus (1506-1585)

The wounds inflicted on the Kashmiri Hindus in the 1986 disturbances were not allowed to heal. Looking back now the episode looks like a mild arm twisting of the State administration and that of the so-called mighty India to gauge their real might and will-power to deal with recurrence of such disturbing situations. The unexpected speed with which anti-India and anti-Kashmiri Hindu designs, the seeds of which read been sown over the years, began to unfold themselves was the most terrifying thing about it. The madrasas financed and run by the Jamait-e-Islami had poisoned the mind of the younger generation with Islamic fundamentalism under dictation from the theocratic Pakistan. The Jamaite-Islami activists had crept into the services at a large scale. They had found their way even into the top rung of the State machinery and also influenced and won the members of the bureaucracy that crossed over to their side. So for all practical purposes the State bureaucracy was hand in glove with pro-Pak elements and forces that had most sinister plans up their sleeves.
Though Dr. Farooq Abdullah saddled himself in power by allegedly rigged elections in 1987, the power had, as a matter of fact, slipped from his hands. The Muslim United Front, a new fangled Muslim outfit owing political allegiance to Pakistan did not take its defeat at the busting lying down and vowed to get its own back. A monster with virulent fangs was harnessing itself for the charge. The Government headed by the nincompoop chief minister was too inefficient to crush the monster raising its horrible head. Law and order machinery that had developed cracks became steadily defunct. Farooq Abdullah openly admitted having sent numerous Kashmiri Muslim youth to Pak for training in arms. He released about seventy of them soon after they had been arrested. It is clear that armed insurgency and subversive activities were receiving state patronage and protection.
Original article- indianindology.com- Surinder Negi

hindugenocide.com
Hindus of kashmir no one cared for until Modi removed Article 370.
Posted by Pradeep Singh at 9:17 PM 16 comments: 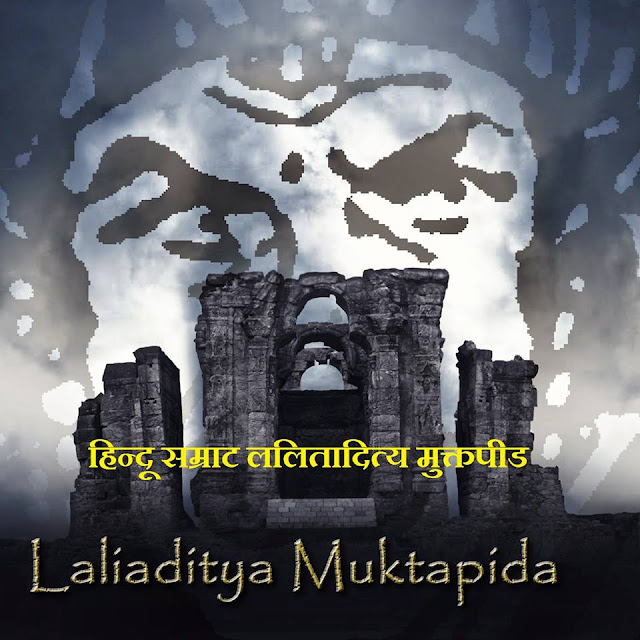 Posted by Decoding Hinduism at 5:43 PM No comments:

Lha-chen-Rgyalbu-Rinchan was first non Hindu king of Kashmir who belonged to Islamic faith(convert). He was not a born Muslim but Buddhist by faith. Rinchan’s father was killed in some internal disputes in Ladakh leading him to run away in exile and settle as a refugee in Kashmir. He took refuge in castle of Ram Chand commander of Raja Sahadeva. Here he met Shamshir a Persian Muslim immigrant- another fellow like him. Rinchan first won confidence of Ram Chand and later killed him to ascent himself to throne and proclaimed himself as king of Kashmir on 6th October 1320.He gained peace by marrying Ram Chand’s daughter Kota Rani and appointing his son Rawan Chand on his father’s post of commander in chief and Shamsir as vazir(Minister) of his kingdom. Even after securing peace he did not feel secure. He wanted to remove stigma that he captured throne by fraud. Therefore he made an attempt to identify himself with the country and the people to understand and follow their culture, religion and traditions, as one of them. To begin with he expressed desire to accept Saiva cult which was most popular form of religion followed in Kashmir. He approached Devaswami Pundit who was head guru of Court Pundits of Kashmir in order to become his disciple and entreated him as his devotees. Devaswami Pundit appeared to be a very strong head man but without imagination. He turned down request of Rinchan as he was Buddhist by origin. (Ref Jonaraja page 20-21). Hindu Kashmir lost this opportunity forever but Shamshir made full use of it. Finding Rinchan in a state of confusion, he consoled him, pleaded him and requested him to leave the decision to chance. It was agreed that he would accept the religion of that person whom he would first see the next morning. By sheer chance of manipulation by Shamshir it happened, that Rinchan eyes fell on a Muslim fakir Sayed Sharafuddin Bulbul shah the very next morning. He accepted Islam from Bulbul shah and adopted name of Shah Sadruddin as first Muslim ruler of Kashmir. After accepting Islam Rinchan founded Rinchanpura a quarter in Kashmir and build first mosque in Kashmir known as “Bud Masheed” on the site of a Buddhist temple. Not very far from here he built another mosque at Ali Kadal and started a Langarkhana (public charity kitchen) after his mentor Bulbul Shah as Bulbul Langer. He even named his only son born with Hindu wife Kota Rani as Haidar and trusted him to the care of Shamshir. Under Rinchan rule state religion of Kashmir became Islam and full patronage was given for conversion to Islam to both Hindus as well as Buddhists leading to rapid decline in their numbers. Rinchan was later attacked by relatives of king Sahadeva and he died of wounds on 25 November 1353.
Posted by Pradeep Singh at 8:37 PM No comments: