That is how Godse saved India.

Posted by Pradeep Singh at 11:02 AM No comments: 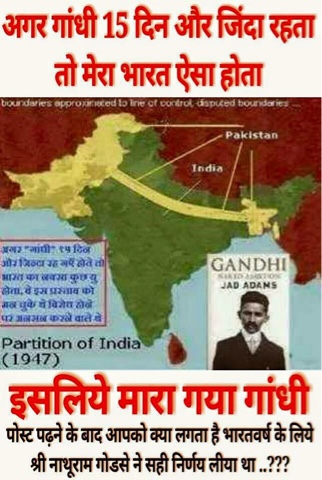 GANDHI WAS SHOT TO SAVE HINDU AGAINST HUMILIATION-

The acts of anti HIndu called " MAHATMA" , whose execution was explained by NV Godse
"Brothers! Our mother land has been cut into pieces. The eagles have torn her skin into bits.
Hindu women are being raped in the middle of the road. How long can we tolerate this? It’s a shame that lakhs of Hindus live like refugees in their own country. Women being raped burn my heart.
...

Gandhi started his fast; the Hindus put their weapons down. I still remember that day.
A poor Hindu told Gandhi, ‘I am putting down my weapons because I don’t want your death on my conscience but I am staying alone with my family in the Muslim area.
That night, before leaving Hyderabad I visited his home. The whole household was screaming, weeping, his only eight-year-old son had been killed by the Muslims. He had no weapon to defend himself.
He threw his son’s body on my lap and said, “Take his blood to your Mahatma. Tell him, if he goes on fast again, he can finish it by drinking not orange-juice but my son’s blood.”
I could not say anything. Gandhi was the Father of my Nation. For a moment, I was tempted to pull out the Muslims from their homes and chop them down.
But I controlled myself. Violence for self-defense is justified; otherwise it is an ill-cultured act. I returned to where Gandhi was staying but he had already left by car.
Of course, there would have been no point in meeting him… he would only have prayed for both the killer and the victim." - Nathuram Godse.
(<<Our mother land has been cut into pieces>>
It was not a systematic well supervised, clean partition separating Muslims and Hindus in a clean, orderly way, sans mob violence.)
http://www.imrajeev.com/why-godse-killed-gandhi/ -Details is here-


Sixty one years after the assassination of Mohandas Karamchand Gandhi, a ‘mahatma’ to many but really a cunning politician who had mastered the art of manipulating the Indian National Congress and offering simplistic solutions to the most complex problems, apart from coercing others to toe his line by abandoning food, the story of his murder continues to elicit both curiosity and passion. He was not the first leader to be felled by an assassin’s bullet, nor is he the only eminent Indian, or South Asian for that matter, to fall victim to an elaborate murder conspiracy.

Yes! I Killed Mohandas Gandhi and I am Glad I Did It!

Posted by Pradeep Singh at 7:16 AM No comments: