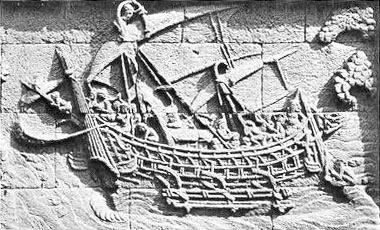 The old notion that the Hindus were essentially a landlocked people, lacking in a spirit of adventure and the heart to brave the seas, is now dispelled. The researches of a generation of scholars have proved that from very early times the people of India were distinguished by nautical skill and enterprise, that they went on trading voyages to distant shores across the seas, and even established settlements and colonies in numerous lands and islands.

In ancient India, owing to the geographical influence, nautical shill and enterprise seems to have been best developed in three widely separated region of the country. These were Bengal, the valley and delta of the Indus, and the extreme south of the Deccan peninsula, called Tamilagam.

Boat-making and ship-building industries were found in India since ancient times. In the Vedic period, sea was frequently used for trade purposes. The Rig Veda mentions "merchants who crowd the great waters with ships". The Ramayana speaks of merchants who crossed the sea and bought gifts for the king of Ayodhya. Manu legislates for safe carriage and freights by river and sea. In some of the earliest Buddhist literature we read of voyages ‘out of sight’ of land, some lasting six months or so.

In Kautalya Arthasastra the admiralty figures as a separate department of the War Office; and this is a striking testimony to the importance attached to it from very early times. In the Rg Veda Samhita boats and ships are frequently mentioned. The classical example often quoted by every writer on the subject is the naval expedition of Bhujya who was sent by his father with the ship which had a hundred oars (aritra). Being ship-wrecked he was rescued by the twin Asvins in their boat.


"There was also extensive intercourse of India with foreign countries, including the Mediterranean lands and the African continent, naturally led to piracy on the waters. There then arose the need for the protection of sea-borne trade, and we are told that “at the outset the merchant vessels of India carried a small body of trained archers armed with bows and arrows to repulse the attacks of the pirates, but later they employed guns, cannon and other more deadly weapons of warfare with a few wonderful and delusive contrivances.”
(source: The Commerce and Navigation of the Ancients In the Indian Ocean - William Vincent pp. 457). These are probably the beginnings of the ancient Indian navy.

In the Shanti Parvan (59, 41) of the Mahabharata it is said that the navy is one of the angas (part) of the complete army. Examples of ships being used for military purposes are not lacking. When Vidura scented danger to Kunti’s five sons, he made them escape to the forest with their mother, crossing the Ganges in a boat equipped with weapons having the power of withstanding wind and wave.

In the Dig Vijaya portion of the Sabha parva, it is said that Sahadeva crossed the sea and brought many islands under his sway after defeating the Mlecchas and other mixed tribes inhabiting them. If this be an historical fact the inference is irresistible that he could not have effected his conquest without the use of boats and vessels. We read in the Ramayana that Durmukha, a Raksasa, who had been fired by the impulse of anger at the deeds of Hanuman, offered his services to Ravana even to fight on the sea.
INDIA WAS EXPORTER OF COMMODITY and also SHIPS OF HUGE SIZES and BRITISH destroyed the industry to dominate!!
INDIAN ECONOMY WAS WORLD LARGEST AND MOST PROSPEROUS NATION AND INDIAN SHIPPING INDUSTRY WAS DESTROYED BY BRITISHERS FOR TRADE DOMINANCE !!!
Nicolo Conti who visited India in 15th century was impressed by the quality Indians had achieved in ship building. He observes:
"The nations of India build some ships larger than ours, capable of containing 2,000 butts, and with five sails and as many masts. The lower part is constructed with triple planks, in order to withstand the force of the tempests to which they are much exposed. But some ships are so built in compartments that should one part be shattered, the other portion remaining entire may accomplish the voyage."
J. Ovington, Chaplain to the British King, the seventeenth-century English traveler, who visited Surat, wrote a book A Voyage to Surat in the Year 1689. He was impressed by the skill of the Indians in ship-building and found that they even outshone Europeans. The timber used by the Indians was so strong that it would not ‘crack’ even by the force of a bullet so he urged the English to use that timber ‘to help them in war’. Indian Teak stood firmer than the English Oak, remarked Ovington.

Posted by Pradeep Singh at 10:41 AM No comments: