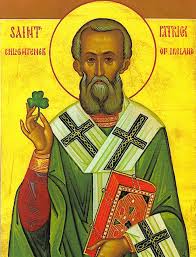 “We know that he was a Roman citizen, because Britain was Roman then, and then he was enslaved and taken to Ireland, where he either escaped or was released,” Casey says. “And then he became a priest and went back to Ireland, where he had a lot of luck converting the Druid culture into Christians.”
Legend says St. Patrick was actually born Maewyn Succat, but that he changed his name to Patricius (or Patrick), which derives from the Latin term for “father figure,” after he became a priest. And that supposed luck of his is the root of all the themed merchandise for modern St. Patrick’s Day.
Saint Patrick's Day is observed on 17 March, which is said to be the date of his death.[4] It is celebrated inside and outside Ireland as a religious and cultural holiday.


A mass murderer of India Druids

The man killed  pagan druids who were Indian Hindus with tattoos of Shiva Lingam with a snake on their arms. They were vegetarian not meat eating as told lie by Vatican Pope. St Patrick  got his orders from the Pope Leo the great ( Leo 1 ).

St Patrick was used by POPE LEO THE GREAT  as a mass murderer and a torturer.
Emperor Valentinian III used Pope Leo 1 to bribe Atilla the Hun to cleanse all druids in his path. This cleared the way for future Papal authority and Christianity .
Druids ( Dryuhus ) were Hindu sages who believed in immortality of the soul , the theory of re-incarnation , laws of Karma and the law of cosmic change PRALAYA - breathing in and out by brahma dissolving the cosmos and rebuilding it all over  again. It was ,Druids who built the Stonehenge.
Druids were polytheistic and had female TRINITY multi armed gods . They were excellent is astronomy and astrology.   The chief of the druids wore golden robes .
Their fire sacrifices ( no blood letting )involved uttering Sanskrit Hindu mantras.
It is a WHITE LIE that druids did human and animal sacrifices.  Ancient Celts engaged in ritual killing but druids were vegetarians and did NOT kill even animals.
Almost all Shiva lingam temples are now covered over by ancient Cathedrals..


Julius Caesar’s description of Druids he encountered while serving as Governor of the Roman province of Gaul is available:

"The Druids are in charge of all religious matters, superin­tending public and private fire sacrifices ( yajna ), and explaining superstitions. A large crowd of young men, who flock to them for schooling, hold the Druids in great respect. For they have opinions to give on almost all disputes involving tribes or individuals, and if any crime is committed, any murder done, or if there is contention about a will or the boundaries of some property, they are the people who investigate the matter and establish rewards and punishments. Any individual or community that refuses to abide by their decision is excluded from the sacrifices, which is held to be the most serious punishment possible. There is one arch-druid of supreme power. On his death, he is succeeded either by someone outstanding among his fellows, or, if there are several of equal caliber, the decision is reached by a vote of all the Druids. At a fixed time of year they assemble at a holy place in the territory of the Carnutes, which is thought to be the center of Gaul. Anyone with a grievance attends and obeys the decisions and judgments which the Druids give”


The Romans under Caesar conquered the Celts and St Pat
Every  Druid knew the Vedas by heart. Tacitus, the adventurer Roman historian had written in ancient days the druids conducted marriages and the couple went around the holy fire 7 times clockwise.


The Icelander saga-the Edda- contains creation passages that are Upanishadic in tone and meter.   Rígsþula or Rígsmál is a Norse god named Ríg  ( Brahma ) the father  of mankind. rick exterminated the Druids using Attila the Hun.

700 years of Roman warfare enmeshed with Holy Roman Church hegemony (including Ireland) virtually extinguished the flames of the Pagan Hindusim.
They destroyed every vestige of Druids.  Druids were given a bad name that they sacrificed humans and animals , when all they did was to put cows ghee into the fire..
Celtic Gods are still called deuos ( devas ).
The celtic sun god  is Surios ( surya ).
The celtic  God of fire is Ughnee ( agni ).
The celtic word was soul is atnam ( atman) .
Stonehedge has 27 stones resembling 27 Nakshatrya- 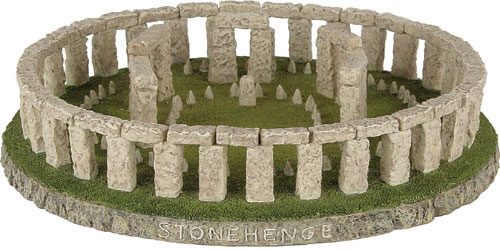 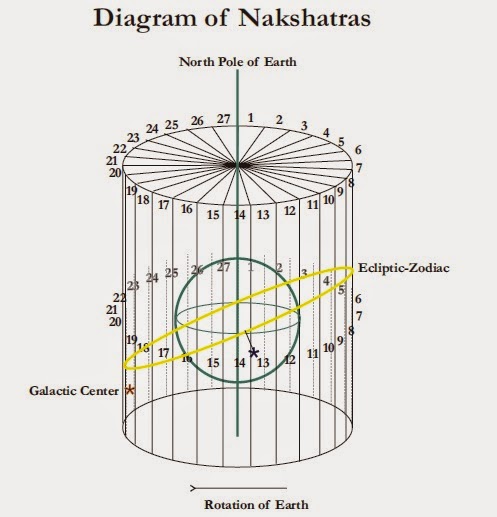 There is a divine ratio of 108 , between earth, moon and sun.

This was NOT accidental and Lord Vishnu took the Varaha ( boar ) avatar for this, to set things in the proper place, so that the earth continued as a rotating a devolving self excited dynamo using the divine number 108 and the golden ratio 1.618.

DESPITE ALL THIS THE IMMORAL WHITE MAN RIDICULED INDIANS OF BELIEVING THE EARTH IS FLAT.

These vulgar invaders robbed us blind in 250 years , converting India from the richest on the planet to the poorest -- and now want to make fun of our poverty.

They call us savages after stealing and patenting our intellectual rights.

The Hindu divine geometry of Sri Yantra has 3 lines intersect at 54 points (number of Sanskrit / Malayalam alphabets ) with shiva and shakti qualities making the magic number 108.. .

54 devas and asuras had churned for the amrit or holy nectar for Samudra Manthan .

All mantras are repeated 108 times.
All prayer beads count up to 108.

108 is the numerical equivalent of OM , in sync with the rhythms of time and space and represents perfect totality.

There are 108 upanishads. Nataraja's cosmic dance has 108 Bharatanatyam poses.
12 rashis and 9 navagrahas multiply to 108.

Ayurveda and Kalari has 108 marmas.   Shiva, Ganesha and Krishna has 108 names.

The 108 th and heaviest element in the periodic table is Hassium ( 108 protons ) .  The rest are too short lived. 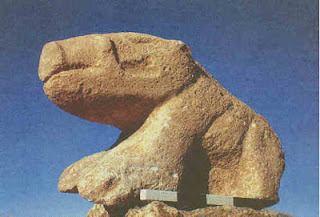 We name our children out of 108 starting sounds.
THIS VARAHA IDOL WAS FOUND IN THE OLDEST STONEHENGE IN TURKEY-  GOBEKLI TEPE

Lord Viṣṇu appeared before King Nābhi with four arms. He was very bright, and He appeared to be the best of all personalities. Around the lower portion of His body, He wore a yellow silken garment. On His chest was the mark of Śrīvatsa, which always displays beauty. He carried a conchshell, lotus flower, disc and club, and He wore a garland of forest flowers and the Kaustubha gem. He was beautifully decorated with a helmet, earrings, bangles, belt, pearl necklace, armlets, ankle bells and other bodily ornaments bedecked with radiant jewels. Seeing the Lord present before them, King Nābhi and his priests and associates felt just like poor people who have suddenly attained great riches. They received the Lord and respectfully bent their heads and offered Him things in worship.


Below: This 3100 year old Druid calendar is a straight lift off a Hindu calendar. 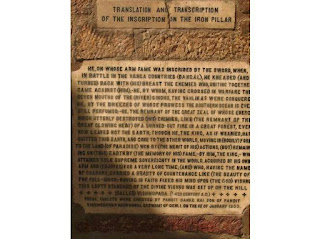 Below: This stone on the HILL OF TARA was originally a Shiva Lingam ( black meteortite stone ) .
This stone is now under Waterford cathedral.
A lot of major Biblical charcters are lifted from Hindu scriptures . Adam is Adama and Eve is Hayyawati , characters from our Hindu Puranas.Adama was the son of Vishnu Kardama. Kardama was the father of Kapila of our Sankhya Philosophy. The bilblical serpent that tempted the couple to eat the apple of the garden of Eden (of the Papa Vriksha- tree of sin ) was Kali Purusha. If all these connections are accurate that would make Adam a younger brother of Kapila. This forest of Eden was on the eastern side of Pradan city 16 square yojanas in size. The Mlecchas are descendants of Adama.Noah is Nyuhah , a descendant of AdamaKali purusha who is the presiding demonic angel of this immoral age of darkness (kali yuga) is verily the Satan mentioned in Abrahamic religions , as per our Bhavishya Purana stolen by Rothschild. The Stone of Jacob appears in the Book of Genesis as the stone used as a pillow at Bet-El. As Jacob had a vision in his sleep, he then consecrated the stone to God. Th Templar Knights found a black Shiva Lingam ( meteorite stone ) which was called the Stone of Scone . In 1296 the original black Shiva lingam stone was captured by Edward I as spoils of war and taken to Westminster Abbey, where it was fitted into a wooden chair, known as King Edward's Chair, on which almost all English sovereigns have been crowned.Over the years the original black stone has disappeared and a duplicate red sand stone put in its place. The stone of Scone is none other than the Shiva Lingam black meteorite stone used by Jacob as a pillow.. Jacob performing a bath to the stone, decorating it, applying sandal paste to it, a Vedic ritual named Maha-RudrabhishekamThe Stone, was mentioned in Macbeth: "... [we shall travel to be] crowned at Scone ..”The duplicate Stone of Scone was last used in 1953 for the coronation of Elizabeth II of the United Kingdom. The original is in the vaults of Rothschild.King Robert the Bruce, the hero of Scotland who led Scotland during the Wars of Scottish Independence against England. Was crowned while sitting on the original black shiva lingam or stone of scone.On Christmas Day 1950, a group of four Scottish students (Ian Hamilton, Gavin Vernon, Kay Matheson, and Alan Stuart) tried to steal this duplicate stone of Scone from Westminster Abbey for return to Scotland. In the process of removing it from the Abbey the duplicate red stone stone broke into two pieces. The original black meterorite Stone of Scone ( from a Kerala Shiva temple in India ) has become a HOLY GRAIL in its own right. Men and women have fought to possess it or to obscure it from those unworthy to lay claim to the Stone.Punch into Google search-SECRET EXCAVATIONS AT JERUSALEM BY TEMPLAR KNIGHTS VADAKAYIL
ajitvadakayil
Posted by Pradeep Singh at 7:33 PM