The career of Prithvi Raj Chauhan has a tragic irony of its own. Though among the bravest of India's warrior heroes, his political naivet=82 bordering on stupidity caused India to knuckle under Muslim rule and usher in an era of unmitigated rape, plunder, chaos, repression and religious conversions which lasted for 600 years.
But what is more tragic is that the Prithvi Raj trait of blundering generosity has continued to haunt all of India's rulers ever since down to Mohandas K. Gandhi, Jawahar L. Nehru and Lal Bahadur Shastri. While the former two, like Prithvi Raj, showed misplaced clemency to the invader and bartered away large chunks of Indian territory for some illusive peace, the latter failed to win back Lahore and Sialkot and the occupied part of Kashmir in the finest hour of India's victory. It will be a day to celebrate when the Prithvi Raj spell of frittering away of India's advantages will be exercised and Indian rulers will once again restore Hinduism to the territories it owned and ruled before Mohammed Qasem's depredations.
Born in 1159 A.D. Prithvi Raj was the last Hindu emperor of India and yet it was he who inflicted some of the most crushing defeats on Muslim invaders. But in spite of putting their armies to rout he committed the blunder of not following the pest to its source and making an end of it. His portrait should hang in India's Cabinet room and Parliament House as a warning to India's future rulers. 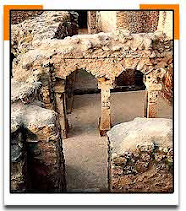 It is a pity that though Prithvi Raj ranks amongst some of India's greatest warriors, some vital details of his career remain unknown. The alien Muslim spell on India has been so blighting that no body seems to have bothered to piece together the life story of this great warrior and last Hindu emperor from beginning to end. This is a measure of India's tragic neglect of its brave and patriotic traditions.
Prithvi Raj Chauhan is also known as Rai Pithora. The surname Chauhan is the corrupt form of Chahaman. This solar dynasty hailing from Sambhar and Ajmer has given India some of her most distinguished rulers. A scion of that family, Vigraharaj IV, was not only a great warrior and ruler but also a celebrated scholar who wrote a Sanskrit drama.
Prithvi Raj's father, Someshwar, was the brother of Vigraharaj IV. The story of Prithvi Raj and his ruler colleagues of different principalities in India engrossed in their petty squabbles and enmities while Muslim hyenas prowled on India's borders, make depressing reading.
Bheemdeo, the ruler of Gujarat, had killed Prithvi Raj's father Someshwar in battle. Prithvi Raj was, therefore, itching to avenge his father's death. An opportunity presented itself when Bheemdeo asked for the hand in marriage of Ichchhini Kumari, the daughter of Jait Parmar, the ruler of Abu. When his suit was rejected, he threatened invasion. Jait Parmar sought Prithvi Raj's help. Prithvi Raj was only too willing to oblige because he had an old score to settle with Bheemdeo. In the battle fought on the banks of the Sabarmati river within Bheemdeo's territory, Prithvi Raj inflicted a crushing defeat on the former. A grateful Jait Parmar then gave his daughter Ichchhini Kumari in marriage to the proud victor Prithvi Raj.
Prithvi Raj's capital had been Ajmer. That non-descript modern name derives from the delightful Sanskrit word Ajaymeru. What is currently known as the Moinuddin Chishti tomb, the Taragadh, the Adhai-din-ka-Zopda, the Annasagar lake and the city palace, all existed during Prithvi Raj's times. They were part of his fortifications. And yet they have been falsely ascribed to subsequent Muslim usurpers by sycophant chroniclers. The palace in Ajmer town, mischievously credited to Akbar, was the palace in which Prithvi Raj used to stay when in town and not in the nearby mountain fortress of Taragadh.
By a stroke of luck Prithvi Raj also became the owner of the large territories forming part of the kingdom of Delhi. Anangpal, the maternal grandfather of Prithvi Raj, ruled in Delhi. He had two daughters. One of them was the mother of Prithvi Raj while the other had a son called Jaichand who ruled at Kannauj. Having no son, Anangpal willed away the kingdom to Prithvi Raj.
Obviously, so far as bravery and patriotism were concerned, Jaichand was no match to Prithvi Raj. Ananagpal too, in his great wisdom, refused to treat the kingdom of Hindusthan as a chattel to be divided equally between his two maternal grandsons, Prithvi Raj and Jaichand. With unerring judgment he selected Prithvi Raj as his sole heir and successor. He was not the one to countenance any fragmentation of his kingdom. Apparently, Prithvi Raj's weakness in believing in the faithless words of treacherous Muslim invaders, his generosity to his inveterate and unscrupulous Muslim enemies and complacency were later developments.
But wise as Anangpal's choice was, it caused short-sighted jealous and avaricious Jaichand a deep heart-burn. He felt specially piqued because he was much senior in age. Burning in ambition to go down in history as an unchallenged emperor of Hindusthan, Jaichand commenced the traditional Rajsooya Yajnya (sacrifice) to proclaim and claim emperorship. He had a daughter called Sanyogita who felt drawn toward Prithvi Raj.
As a matter of cold formality, Jaichand had invited Prithvi Raj to the Yajnya. It is customary for the host, on such occasions, to allocate various duties connected with the ceremony to his kith and kin so that the guests may be well looked after. To spite Prithvi Raj, Jaichand appointed him chief of the palace guard for the duration of the ceremony. Thereby Prithvi Raj had not only to keep standing outside the palace but do humble obeisance to all and sundry. This imposed duty did not quite accord with his reputation as a fearless warrior and patriot who held promise of being a future emperor.
Prithvi Raj made most of the humble role assigned to him by the inimical master of ceremonies and eloped with the latter's daughter Sanyogita who was already head over heels in love with him (A.D. 1175).
This added to the enmity between the two. Prithvi Raj now made Delhi his home. In 1183 A.D. he launched on a career of conquest and annexed Bundelkhand and other adjoining regions.
It was Prithvi Raj's ambition to consolidate his numerous fragmented kingdoms in one country-wide realm under his leadership. And but for his complacence, misplaced generosity, naivet and haughtiness, he held great promise of being one of India's most farsighted, brave and patriotic rulers.