Rahul Gandhi Partied After Mumbai Attack
His insensitive remarks on the killing spree of Sikhs after the assassination of Indira Gandhi and his refusal to condemn openly the likes of Sajjan Kumar and Jagdish Tytler made one wince.

Do you know what Rahul Gandhi was doing at the time of Mumbai Terror Attack.

This is what he was doing, the would be PM of India,If , and a Big If, the party comes to power in India!

Note that it is not a rag sheet but India Today.

Even before the tears of Major Sandeep Unnikrishnan’s mother could dry up, Congress general secretary and heir apparent Rahul Gandhi went partying with his pals at a farmhouse on Delhi’s outskirts.

The Prince partied hard, till 5 in the morning, on Sunday at the ‘sangeet’ for the forthcoming wedding of Samir Sharma, his childhood friend. They were at a sprawling farmhouse at Radhey Mohan Chowk, the haven of people who lead charmed lives beyond Chhatarpur.

Just a day earlier, his sister Priyanka Vadra had caused a flutter by saying the late Indira Gandhi would have “made us very proud” by the way she would have reacted to the Mumbai terror strikes. Mumbai appeared to be far from her brother’s mind as he boogied at the farmhouse with Samir Sharma, US-based furniture designer son of Captain Satish Sharma, the late Rajiv Gandhi’s flying partner who nursed the First Family’s pocketborough, Rae Bareli, till Sonia Gandhi chose to contest from there in 2004.

The Prince seemed to be completely out of sync with the mood of the nation post-26/11. Since Wednesday night, officials have been cancelling parties they were meant to host and even restaurants called off special events.

Saturday night’s ‘sangeet’ was a lavish affair. It was hosted by Leena Musafir, sister of the woman with whom Samir is getting married, and her husband Inder. The party was attended by over 800 guests, including regulars at Page 3 dos. “When everyone is cancelling parties or just keeping them low-key, Rahul Gandhi had no business to be celebrating. His action makes us lose faith in future leaders,” said Ajay Bahl, a leading corporate lawyer who was trapped in the thick of the action on 26/11 at The Oberoi, Mumbai, but managed to escape with the help of the hotel staff.

The Gandhis, including Sonia Gandhi’s mother Paola Maino, were present in strength at the 2004 wedding of Samir’s sister, Sarika, who is married to actorturned- TV producer Rahul Bhatt. Sarika and Rahul now manage a television production house.

article in the Michigan daily dated 10 September 1977 quoted a New Indian Express story to this effect.

The article by the New Indian express is not available.
However I found some interesting information from the WSJ where in indicates that its expose of Boeing payouts might have delayed the signing of the Boeing deal and there is a mention of this amount.

“On February 5, 1977, the Cabinet of then Prime MinisterIndira Gandhi approved the purchase of three Boeing 737 aircraft for Rs 30.55 crore, swiftly bringing to a close the deal in less than nine months of setting up a committee to recommend how the fleet capacity of Indian Airlines should be augmented.

These nine months saw several controversies around the exercise, including a meeting in the room of Indian Airlines’ acting chairman A H Mehta, where “Indira Gandhi’s son”, Rajiv Gandhi (who was then an Avro commander with the airline), was ushered in and shown some “financial projections”, a procedure the J C Shah Commission later found “totally outside the ordinary course of business”. The Shah commission that probed excesses of the Emergency years (1975-77) also brought out how the Boeing deal was pushed by Indira Gandhi and rushed through after overruling the recommendations of the Planning Commission and the Public Investment Board.

However, soon after the Cabinet’s approval of the Boeing deal, Indira Gandhi had told the then civil aviation and tourism minister,

K Raghuramaiah, about a WSJ report and advised him to wait before the purchase order was placed. On February 8, Indira Gandhi told Raghuramaiah to “go ahead” and “place the order”. The minister did just that: He informed the IA management about the Cabinet approval and the contract with Boeing was signed on February 9, 1977. (Please see Business Standard’s April 18 report: “Controversial Boeing Deal of 1976-77: Rajiv Gandhi met IA brass, was shown financial details against norms”, http://goo.gl/95yZI)

A Business Standard investigation into what precisely led to the delay reveals that Indira Gandhi might have become cautious after the publication of the WSJ report in January 1977 referring to questionable payments made by US companies, including Boeing. On January 21, 1977, WSJ carried a report headlined “Questionable Payments Total Put at $412 Million”. It mentioned Boeing as “topping the list” of 288 companies which had made questionable payments.

Quoting a study by a Washington concern, Charles E Simon and Co, the news report went on to state that Boeing had admitted to making payments of $70 million. The details were collated from information filed by the companies with the Securities and Exchange Commission. The list, according to the WSJ report, included other prominent American corporations (with the payment amounts in brackets): Exxon Corp ($46 million), Northrop Corp ($32 million), Lockheed Aircraft Corp ($25 million) and Armco Steel ($17.5 million). The report also carried a disclaimer that the summary of payments included commissions, agent fees, over-billings and other payments, “many of which may not be deemed improper”.

Indira Gandhi’s caution over concluding the deal was understandable. The final go-ahead for signing the contract might have been given only after ensuring that nothing specifically controversial about the deal appeared in any foreign newspaper. Domestic politics might have also prompted the hasty decisions that drove the deal.

The Hindu , in an exposure revealed that wikileaks released cables indicating that Rajiv Gandhi was the middleman in the Viggen fighter Aircraft deal.

Much before he became Prime Minister, during his years as an Indian Airlines pilot, Rajiv Gandhi may have been a middleman for the Swedish company Saab-Scania, when it was trying to sell its Viggen fighter aircraft to India in the 1970s.

The astonishing revelation that he was the “main Indian negotiator” for a massive aircraft deal for which his “family” connections were seen as valuable, is contained in the Kissinger Cables, the latest tranche of U.S diplomatic cables obtained by WikiLeaks and accessed by The Hindu as part of an investigative collaboration. The cables will be released on Monday.

The British SEPECAT Jaguar eventually won the race, from which Saab was forced to withdraw by the U.S.

Rajiv Gandhi, who kept away from politics until he was pushed into it by his mother Indira after the death of his brother Sanjay in 1980, came into public life with a squeaky clean image. Years later, a controversy over bribes paid in another military deal with a different Swedish company, Bofors, was to lead to Rajiv’s and the Congress’s defeat in the 1989 elections.

A series of 41 cables between 1974 and 1976 give glimpses into the “fighter sweepstakes” in India, with one wryly observing that the Swedish company had “understood the importance of family influences in the final decision in the fighter sweepstakes.”

Dassault, the French aircraft maker, too had figured this out. According to the cable, their negotiator for the Mirage fighter aircraft was the son-in-law of Air Marshal O.P. Mehra, then Air Chief.

SION NOT TO PURCHASE BRITISH JAGUAR BECAUSE OF HER PREJUDICES AGAINST BRITISH. DECISION WOULD BE BETWEEN MIRAGE AND VIGGEN. THE SWEDISH DIPLOMAT SAID THAT SWEDEN’S NEUTRAL POSITION IN WORLD POLI- TICS IS OFFSETTING VIGGEN’S HIGHER COST. HE EXPRESSED IRRITATION AT THE WAY MRS. GANDHI IS PERSONALLY DOMINATING NE- GOTIATIONS, WITHOUT INVOLVEMENT OF INDIAN AIR FORCE OFFICERS. 3. ACCORDING TO SWEDISH EMBOFF, NEGOTIATIONS WITH SWEDES ARE FOR 50 VIGGEN AIRCRAFT TO BE DELIVERED AT $4-5 MILLION PER AIRCRAFT* SWEDES BELIEVE INDIANS HAVE MADE DECISION NOT TO PURCHASE ANY MORE SOVIET MILITARY AIRCRAFT. 4. DAO COMMENT: DAO HAS NO ADDITIONAL INFORMATION TO EITHER REFUTE OR CONFIRM THE ABOVE INFORMATION. SAXBE CONFIDENTIAL NNN”

Where the original document is now held – online or on microfilm, or remains in “ADS” (State Department’s 1973 Automated Data System of indexing by TAGS of electronic telegrams and P-reels) with the text either garbled, not converted or unretrievable.

Cablegate does not originally have this field. We have given it the entry ‘TEXT ONLINE’. 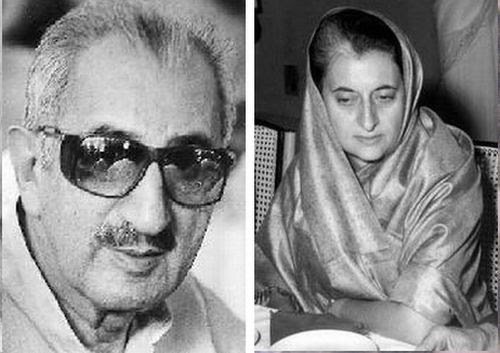 Indira Gandhi has always been one of the most controversial figures in Indian politics. Her marriage with Feroze Gandhi was mired with controversy and after the birth of Rajeev Gandhi, Feroze and Indira separated. It has, thus, been speculated that Sanjay Gandhi was Mohammed Yunus’ son.

Posted by Pradeep Singh at 4:55 AM