The Da Vinci Code by Dan Brown where he mentions that Jesus Christ was married to Mary Magdalene , they had a child and the heir to Jesus , a girl, was living in France. 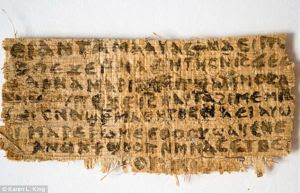 The Bible was compiled some 300 years after the death of Jesus Christ by Constantine in a conclave of cardinals in an effort to retain his Roman Empire.

Over 300 legends about Jesus were collected and the conclave chose those that met with the approval of Constantine.

This is the Bible.

Recent emergence of a text indicated that Jesus was married to Mary Magdalene.

The document was called a modern Forgery.

Now by carbon dating the document indicating that Jesus was married to marry Magdalene is not a forgery and is genuine.

The studies, published Thursday in the Harvard Theological Review, represent the latest chapter in the years-long saga surrounding what Harvard theologian Karen King has dubbed the Gospel of Jesus’ Wife. King brought the text into the global spotlight in September 2012, at a symposium in Rome, but the publication of her analysis was held up for more than a year when questions were raised about the text’s authenticity.

…The fragmentary text, written in an Egyptian Coptic language, is controversial not only because Jesus appears to refer to his wife, but also because it discusses the worthiness of a woman named Mary for what might have been a leadership role. Here are a couple of other intriguing phrases: “she will be able to be my disciple” … “I am with her,” as in “I dwell with her.”…..


The papyrus fragment was purportedly acquired by an East German collector in the 1960s, sold to its current owner in 1999, and made available to King for study in 2011. The owner has remained anonymous, adding to the mystery surrounding the scrap’s origins.
Skeptics, including Vatican officials, insisted that the text was a modern-day forgery because the phrases were ungrammatical and appeared to be inexpertly cribbed from other apocryphal scriptures in circulation.
To settle the argument, researchers subjected the business-card-sized scrap of papyrus to radiocarbon tests and micro-Raman spectroscopy. One of the carbon-dating tests indicated that the papyrus went back somewhere between the year 659 and 869, with the most likely date around 741. Other tests showed that the chemical makeup of the ink was consistent with inks that were used between the first and the eighth century.

Per Harvard study-
BOSTON - New scientific tests suggest a fragment of papyrus in which Jesus speaks of "my wife" is more likely an ancient document than a forgery, according to an article published Thursday by the Harvard Theological Review.
The text, which is written in Coptic and is roughly the size of a business card, specifically contains the phrase "Jesus said to them, my wife."
Karen King, a Harvard professor of divinity, says the papyrus probably dates to eighth century Egypt, based on radiocarbon dating and tests on the ink's chemical composition.
"If it was written in the eighth or even the ninth century, it's still an ancient document," she said in a conference call Thursday. "It's not a modern forgery."
But, she stressed, the fragment doesn't prove that the historical Jesus was actually married. Most reliable evidence from early Christianity is silent on Jesus' marital status, King added.
If anything, she says, the papyrus provides insight into early Christianity's debates over family life.
"Early Christians were extremely interested in whether or not they should marry or be celibate or whether it was OK to have a family or whether one should remain virginal," King said.
King said the papyrus, which contains about eight partial lines of text, appears to make the case that mothers and wives can be disciples. Jesus references his mother, wife, and another female as his disciples apparently discuss whether a woman — identified as "Mary" — can join their ranks.
According to King's translation, the text then reads "Jesus said to them, "My wife ..." That is followed in the next line by "... she is able to be my disciple ..."
King originally revealed existence of the papyrus in 2012. Calling it the "Gospel of Jesus's Wife," her announcement sparked debate among religious and ancient scholars. But publication of her findings was delayed for the tests. King maintains the "gospel" moniker was appropriate.
While the papyrus is too small to discern anything definitive about who composed it, King argued Thursday that the text belongs to a body of ancient texts that illuminate facets of Jesus' life. "It contains a dialogue between Jesus and his disciples," she said. "That would normally put it in the category of gospel."
King hopes the research puts to rest questions about the text's authenticity.
But Brown University Professor Leo Depuydt, in an analysis also published Thursday by the Harvard Theological Review, was not convinced. He said the text contains grammatical errors that a native Coptic speaker would not make. King suggested in a phone interview that the text is written in an informal style that is found in other ancient Coptic texts.
Others have questioned the mysterious provenance of the papyrus.
King says she obtained the text in 2011 from a donor that wants to remain anonymous. That owner had purchased the text in 1999 from a collector who, in turn, had acquired it in East Germany around 1963.
LINK- CLICK HERE