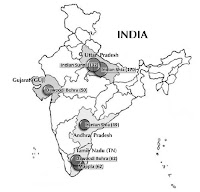 A 2009 study by India's National DNA Analysis Centre shows Indian Muslims display a genetic affinity with their neighbouring Non-Muslim populations along with low levels of Arabian, Central Asian and Iranian admixture. The study sampled 431 Indian Muslims from Uttar Pradesh, Gujarat, Andhra Pradesh and Tamil Nadu. The results showed distinctions between the Muslim communities based on geographic origins and a greater affinity to their neighbouring non-muslims than to each other. However, the study also does note a contribution to the genetic structure of Indian Muslims coming from Iranian and Arabian populaitons. The study does show some distinctive Y-DNA haplogroup frequencies especially in Haplogroup J: 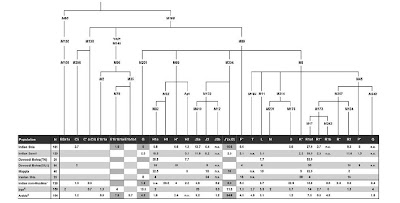 Most noteworthy were the J2, J2a and JxJ2 frequencies of the Indian Shia population which were substantially higher than those of Indian Non-Muslims.


The spread of Islam in India was predominantly cultural conversion association with minor but still detectable levels of gene flow from outside, primarily from Iran and Central Asia, rather than directly from the Arabian Peninsula.